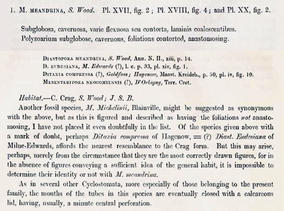 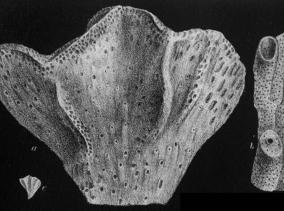 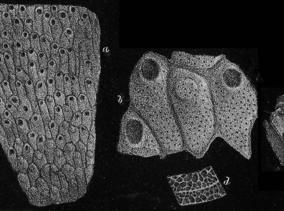 Colonies are up to about 6 cm in diameter, spheroidal in overall shape and composed of broad bifoliate fronds, although usually recovered as broken, flake-like pieces. Fronds are typically corrugated and anastomose with adjacent fronds along their edges. They are relatively robust, about 0.7-1 mm thick, with a well-defined median budding lamina overlain by up to four generations of zooids on each side. Long, narrow bands devoid of autozooidal apertures (maculae) are occasionally developed. Early astogeny is unknown.

Autozooids are elongate with gently convex frontal walls containing circular pseudopores slightly less than 10 µm in diameter and sometimes having raised edges. Apertures tend to be slightly longitudinally elliptical, about 0.12-0.16 mm long by 0.10-0.14 mm wide, and are often closed by a terminal diaphragm containing scattered pseudopores. Rarely, a small aperture is present at the centre of the terminal diaphragm, probably indicating a secondary nanozooid. Preserved peristomes are short.

Kenozooids are developed sporadically. Most have polygonal, pseudoporous frontal walls and lack an aperture; however, patches of kenozooids with polygonal apertures and no frontal walls may be present.

Gonozooids are rare. The brood chamber is transversely ovoidal, about 1 mm long by 2 mm wide, and pierced by a few autozooids. The terminal ooeciopore is transversely elliptical and smaller than an autozooidal aperture.