Adapted from the Oxford Dictionary of National Biography. 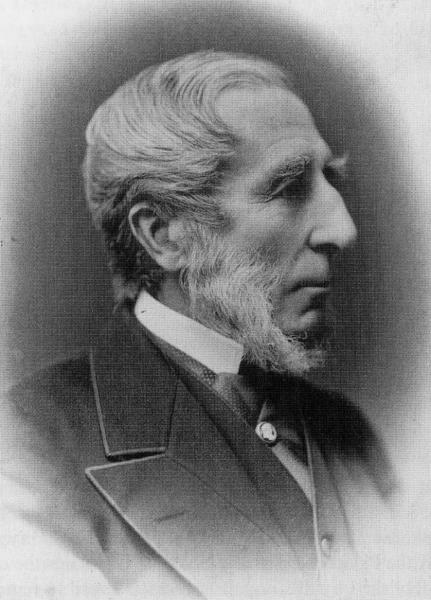 George Busk was born on August 12th, 1807, in St Petersburg, Russia, the second son of Robert and Jane Busk. He was educated at Dr Hartley’s school, Bingley, Yorkshire, and then served six years as an articled student of the College of Surgeons. He completed his medical education as a student at St Thomas’s Hospital, London, and St Bartholomew’s Hospital, and became a member of the Royal College of Surgeons.

During his service he successfully employed the microscope to investigate pathological subjects such as cholera, and made some important observations on scurvy. He contributed several reports to the Seamen’s Hospital Society on these subjects, and on cases of smallpox and typhus fever.

On August 12th, 1843 George Busk married his cousin Ellen; they had two daughters. In 1855 he retired from active service and moved to Harley Street in central London. It was during this period that he became more involved in natural history, including palaeontology. He contributed to the debate on hominid evolution, describing Neanderthal bones from Gibraltar, and was one of the leading authorities on bryozoans, writing on the group between 1849 and 1886.

Busk was the author of many bryozoan species and some higher taxa, for example the orders Ctenostomata, Cheilostomata and Cyclostomata, which he erected in a paper published in 1852 describing the bryozoans collected during the voyage of the H.M.S.  Rattlesnake to Australia. His Monograph of the Fossil Polyzoa of the Crag, published by the Palaeontolographical Society in 1859, was for 150 years the only monograph on bryozoans to be published by this society established to report on British fossil species. Other major works include Catalogue of Marine Polyzoa in the Collection of the British Museum, published in three volumes between 1852 and 1875, and Report on the Polyzoa Collected by HMS Challenger during the Years 1873-1876, published in two volumes in 1884 and 1886.

Busk was the editor of the Microscopical Journal (1842), the Quarterly Journal of Microscopical Science (1853-68), Natural History Review (1861-5) and the Journal of the Ethnological Society (1869-70). He was Secretary and Vice-President of the Linnean Society of London and in 1871 received the Royal Medal of the Royal Society. He was treasurer of the Royal Institution and was the first Home Office inspector of laboratories under the Cruelty to Animals Act. From 1859 he was a member of the Geological Society and was awarded the Lyell Medal in 1878 and the Wollaston Medal in 1885.

Busk died at his home on August 10th, 1886. His collection of Bryozoa is in the British Museum (Natural History), much of it presented by one of his daughters in 1899.