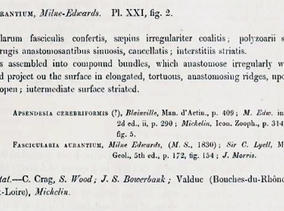 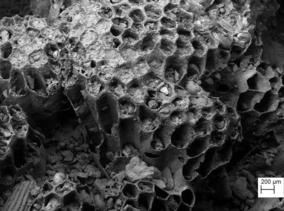 Large colonies, generally 4-8 cm in diameter but rarely up to 15 cm, with a hemispherical, ovoidal or spheroidal shape. When sectioned vertically the conspicuous radial structure of colonies resulting from the columnar subcolonies (fascicles) is revealed. Subcolonies comprise cylindrical bundles of zooids enclosed by exterior wall calcification that is smooth apart from longitudinal traces of interzooidal walls or transverse undulations. Adjacent subcolonies coalesce at irregular intervals, sometimes remaining separated for long distances. However, extensive coalescence between subcolonies may result in dense regions, some colonies having semi-regular alternations of dense and sparse regions producing a conspicuous growth banding.

Autozooids are very long (> 5mm) and tubular, with polygonal apertures averaging 0.24 mm in diameter that opens at the distal of the subcolonies on the colony surface. Internally, autozooids may contain thin transverse diaphragms.

Gonozooids occur in a minority of colonies. These large chambers extend between subcolonies and cause a reduction in their diameter. They are roofed by smooth calcification (exterior wall), occasionally pierced by subcircular autozooidal apertures. The probable ooeciopore is subcircular and about 0.11 mm in diameter.