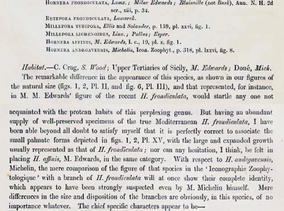 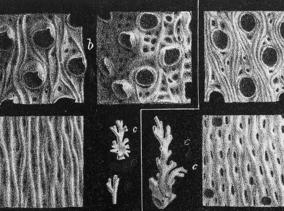 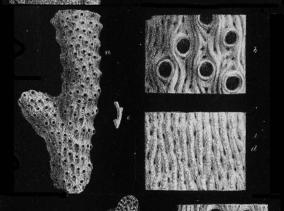 Colonies are dendroid, the largest observed example 55 mm in width. The branches are generally 1-2 mm in transverse diameter and ovoidal in cross-section. Reverse surfaces are relatively flat in young branches but become convex in older branches. Primary branches arise in a circlet from an encrusting base that may be flat, concave or tubular (if moulded around a perished cylindrical substratum). Ramifications are mostly dichotomous bifurcations at acute angles; lateral ramifications are lacking and anastomoses between branches are rare. Cancelli infill areas between bifurcating branches in older, proximal parts of colonies, especially immediately above the base. Small colonies have branches arranged in a cone, with autozooids opening on the inside, but larger colonies become more convoluted and three dimensional.

Autozooidal apertures are small, 0.06-0.10 mm in diameter, more or less circular and arranged in semi-regular longitudinal rows, adjacent apertures being spaced 0.20-0.43 mm apart. About 5-10 rows of apertures occur across the width of a branch. Thickened calcification forms a system of ‘nervi’ that winds between the apertures in older branches. Autozooidal peristomes may be slightly raised in well-preserved specimens; cusps are not evident.

Cancelli cover the frontal surface of branches between apertures and also the entire reverse surface where they are elongated and arranged in longitudinal rows. Often a distinctive cancellus is present above and below each aperture, imparting a lozenge-like appearance.