The Norwich Crag outcrops mainly in Norfolk and comprises predominantly fine-grained marine sands with some gravels and clays. It has a maximum thickness of 40 metres. The formation rests unconformably on various older units, including the Coralline Crag and Red Crag formations.

In Suffolk, south of Aldeburgh, the Norwich Crag Formation is divided into the lower Chillesford Sand Member and the upper Chillesford Clay Member. Beneath the water-table the sands are dark green, but at outcrop they are oxidised and become yellow to pale brown in colour.

Sedimentary structures include horizontal bedding, ripple marks, flaser bedding, thin clay drapes, trough cross-sets up to 0.3 m thick, vertical burrows, channel scours and mudcracks. Over a large area around Southwold, the sands of the Norwich Crag are interbedded with gravels (‘Westleton Beds’) and clays, the latter usually pale to medium grey or buff, with ochreous staining.

Below is a list of Norwich Crag localities, shown on the map below. Please follow the links for more information. 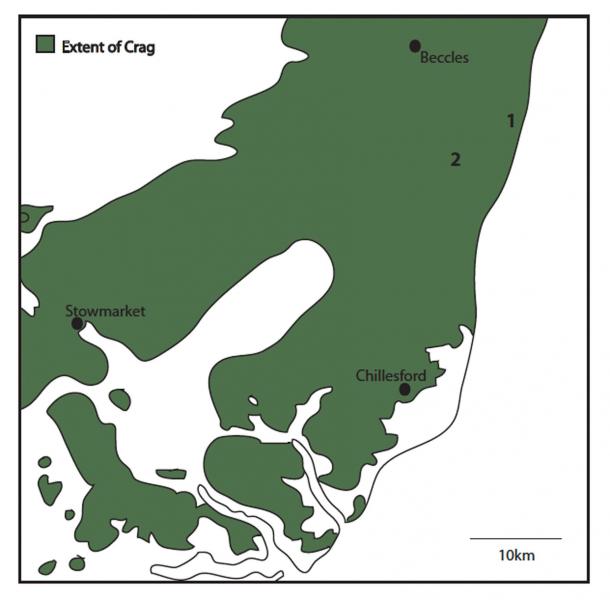 <<Back to The East Anglian Crags