The phylum Bryozoa, formerly called Polyzoa or Entoprocta, represents one of the most common groups of macrofossils found in the post-Cambrian marine fossil record. This reflects the fact that most species have calcareous skeletons. All fossil bryozoans are marine or brackish; the relatively few species inhabiting freshwaters today do not have mineralised skeletons.

Bryozoans are active suspension feeders. The great majority of species are sessile, living permanently attached to a hard (e.g. rock or shell) or firm (e.g. seaweed) surface. All bryozoans are colonial with each colony being formed of zooids, genetically identical individuals (i.e. clones). Colonies grow by the budding of zooids from a single founding zooid, the ancestrula, and its successors. Mature colonies contain from fewer than ten to many thousands of zooids, each zooid usually having a surface area of no more than 2 mm2. Although budding is an asexual process involving mitotic cell division, the formation of new colonies is normally a sexual process, colonies being produced by larvae developed from the fertilization of an egg by sperm typically from another colony. Bryozoan colonies, and often their constituent zooids, are hermaphroditic.

Colonies may be made up entirely of feeding zooids called autozooids, or may include heterozooids which are specialised to perform other functions such as reproduction, defence or structural support. Autozooids consist of a body wall enclosing a fluid-filled cavity called the coelom, which contains the digestive system and other organs. In most species the body wall has a calcareous layer forming the hard skeleton (zooecium) of the zooid; the mineralized skeleton of the whole colony is sometimes called the zoarium. Most bryozoans have skeletons made of the mineral calcite but some cheilostomes are aragonitic and others employ a mixture of calcite and aragonite.

Bryozoans have a U-shaped gut with a separate mouth and anus. They have a bell- or inverted cone-shaped lophophore with a ring of between 8 and 30 or more tentacles, which is used to feed on particles, mainly phytoplankton, in suspension. Cilia on the tentacles beat in unison to create a water current that enters the lophophore and exits at the sides between the tentacles; some food particles go directly to the mouth at the base of the lophophore, whereas others are sieved by the cilia and/or batted back into the flow at the centre of the lophophore by tentacular flicking. 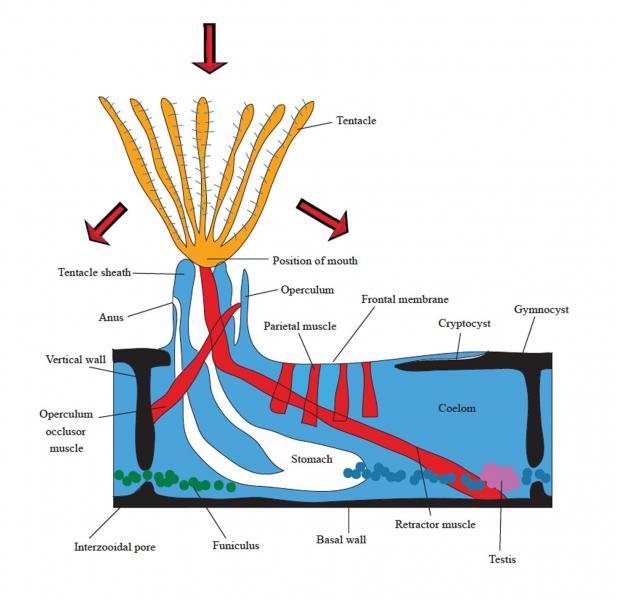 Figure. Anatomy of a basic bryozoan zooid, illustrated by a vertical section through a cheilostome zooid with the lophophore extended. The red arrows indicate feeding current flow.

Bryozoan zooids have a primitive nervous system, the nerves of individual zooids being interconnected. Zooids can also be connected by a circulatory system called the funiculus. Funicular strands are linked to the stomachs of the autozooids and transport metabolites both within and between zooids; this is particularly important for the provisioning of non-feeding zooids, developing larvae and newly budded autozooids incapable of feeding. Pores in the skeletal walls allow nervous and funicular connections between zooids, and in some species soft-tissue linkages also exist over the outer ends of the skeletal walls between zooids.

New zooids are usually budded at specific locations on the colony surface. Budding pattern largely determines the shape of the colony. Three basic colony types can be distinguished: encrusting, erect and free-living. Encrusting colonies tend to be either sheet-like or runner-like, and new zooids are sometimes budded on top of older ones to give a multilayered colony. Erect colonies can be tree-like, frondose or reticulate; some are rigid and others flexible, due to the presence of either elastic joints linking stiff internodes or a weakly mineralised skeleton. Free-living colonies outgrow their tiny substrates and come to rest directly on the sediment surface; most have the form of small concavo-convex domes (‘lunulites’).

New colonies can be formed by clonal fragmentation in some species, especially in erect species with fragile branches which can easily break off, be transported away and continue colony growth elsewhere.

Bryozoans are usually found in marine, shallow, oxygenated water, with plentiful phytoplankton for food, stable hard or firm substrates, and without high levels of turbidity caused by mud or sand in suspension. Most species are subtidal and inhabit the mid- to outer continental shelf, although bryozoans can be found from the intertidal down to 8000 metres depth.