Charlesworth (1835) first distinguished the lower division of the East Anglian Crags as the Coralline Crag, due to its high, rock-forming content of ‘corallines’, later recognized to be the skeletal remains of bryozoans. The Coralline Crag Formation consists of variably cemented carbonate sands and silty sands of shallow marine origin. Onshore it covers a small area of south-east Suffolk as a main NE-SW trending outcrop extending from Aldeburgh southwards to Orford, plus three smaller outliers further south-west (Sutton, Ramsholt and Tattingstone). With a thickness up to 20m thick, the Coralline Crag rests unconformably on the undulating surface of the Eocene London Clay Formation. Three subdivisions – the Ramsholt, Sudbourne and Aldeburgh members - were recognized by Balson et al. (1993) on the basis of sedimentary and faunal facies.

The Ramsholt Member consists of 7.5m of silty carbonate sands containing a rich fauna dominated by molluscs but with significant numbers of bryozoans too. The characteristically good fossil preservation in this member can be linked to the lack of aragonite dissolution: not only are aragonitic fossils not lost through leaching, but there is no dissolved aragonite to be reprecipitated as carbonate cement onto the surfaces of other fossils. High levels of bioturbation suggest slow deposition. The Ramsholt Member rests unconformably on the London Clay Formation, its base often comprising a conglomeratic lag containing phosphatised mudstone pebbles and occasional ‘boxstones’, phosphate-cemented sandstone cobbles derived from a Miocene formation that appears to have been totally destroyed by erosion.

The Sudbourne Member rests with minor unconformity on the Ramsholt Member. Up to 12m thick, this unit of cross-bedded, well-sorted carbonate sands represents submarine sandwaves, up to 3-4m high, in a high-energy tidal environment. Palaeocurrent directions run from northeast to southwest, parallel to the main outcrop of the Coralline Crag, suggesting that the elongated modern outcrop preserves the form of a tidal sandbank aligned parallel to the ancient coastline. Fossils in the Sudbourne Member are usually fragmented, with the degree of comminution tending to increase towards the southwest in the direction of transport. Nevertheless it is possible to find some unbroken fossil bryozoans, probably representing colonies that lived on or between the sandwaves and were rapidly buried with minimal transportation. Most of the aragonitic elements of the biota have been lost through leaching but evidence of their former presence is sometimes preserved in the form of mould bioimmurations on the undersides of calcitic bryozoans.

The Aldeburgh Member, occurring only in the northern part of the main Coralline Crag outcrop, comprises bryozoan-rich skeletal sands and is up to 13m thick. Small scale cross bedding may be developed but the sets are less well-defined and considerably smaller than those present in the Sudbourne Member with which the Aldeburgh Member may at least in part be the lateral equivalent. Globose colonies of the large cyclostome bryozoans Meandropora aurantium, M. tubipora and Blumenbachium glososum are particularly common in the Aldeburgh Member.

Below is a list of Coralline Crag localities, shown on the map below. Please follow the links for more information. 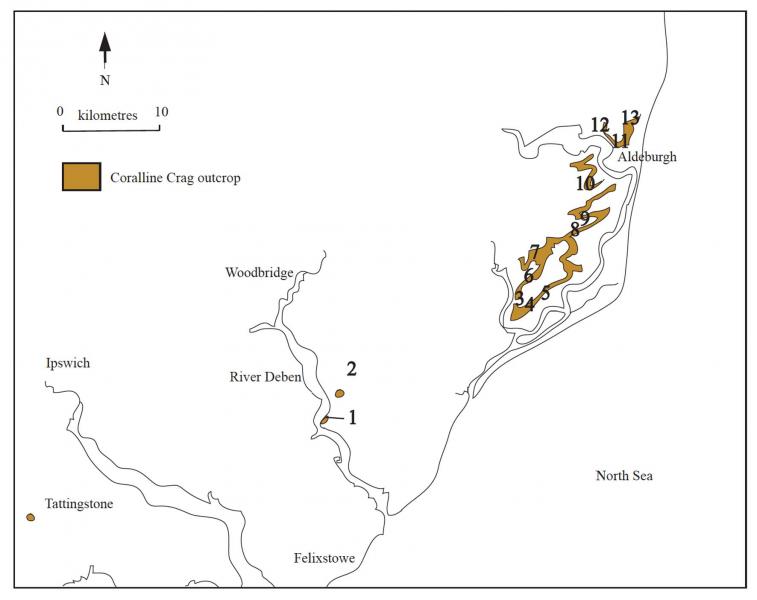 << Back to The East Anglian Crags