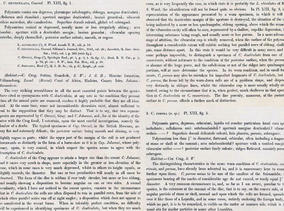 Colonies are disc shaped, free-living (lunulitiform) and attached to a minute substrate often completely enveloped. Autozooids and vibracula open onto the convex upper surface whereas the concave underside is covered by kenozooids arranged in long radial sectors. Colonies from the Coralline Crag are typically up to 7 mm in diameter, most originating asexually by regenerative growth from a fragment of a pre-existing colony. The ancestrula and early astogeny have not been described in material from the Coralline Crag.

Autozooids are rounded rhombic, longer than wide, on average about 0.43-0.55 mm long by 0.28-0.40 mm wide. Gymnocyst and spines are lacking but the granular cryptocyst is well-developed, with up to six lobate denticles extending inwards almost as far as the midline of the zooid. The opesia is arch shaped distally. Ovicells are lacking.

Vibracula are present distally of each autozooid and measure 0.20-0.23 mm long by 0.18-0.20 mm wide. They have ear-shaped opesia, asymmetrical condyles and proximally directed rostra which are deflected either to the left or right of the associated autozooid.